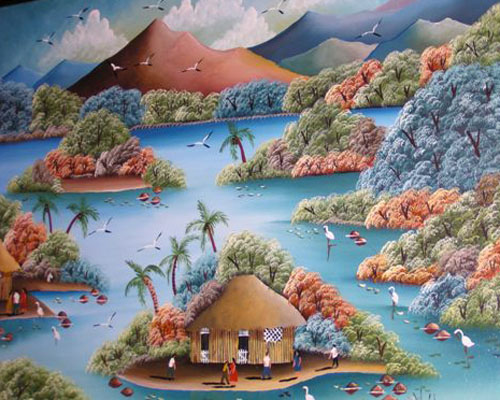 With my side-swinging satchel and futbol cinco shoes on, I set out with my guide Douglas to climb 1394 meter high Volcán Maderas in the thickening mist. Douglas was a Sandinista supporter, who spoke about weapons used during the Contra war and the history of American intervention.

“Eso puta Reagan” was a refrain.

After a while, so tired from hiking and talking, all I could do was listen. The view from the top was clouded over, though a dip in the crater lake was a nice consolation. On the way down, Douglas asked if I liked cerveza and later if I liked women. affirmative on both accounts.

Later, while I sipped on a cool Victoria at the wood-shack-bar by the base of mountain, it started to seem like my guide thought he was still working. Just what exactly were he and the bartenderess whispering about and why did I feel like part of a transaction when they looked over? She was nice and had spent eight years living in my old home-city of Heredia, Costa Rica, but was quite a bit older. With purple bags under her eyes, she seemed to fit the run down surroundings a little too well.

I was convinced my guide was trying to set me up with the bartenderess, so I escaped toward the backyard bathroom, weaving around giant hogs that oinked and bumped my legs. Some of these here hogs could easily have both out-aged and outweighed me.

Relaxing on Playa Santo Domingo after fleeing the unlikely situation, a local boy wandered over, asking what I was doing here. I’d just climbed Volcán Maderas. He responded that he had once climbed 1610 meter Volcán Concepción, the active and bigger of the twin volcanoes and told the story of the foreigner, who lost his face when he tried to look down into the eye of the live volcano.