The continuing story of Terry Fox 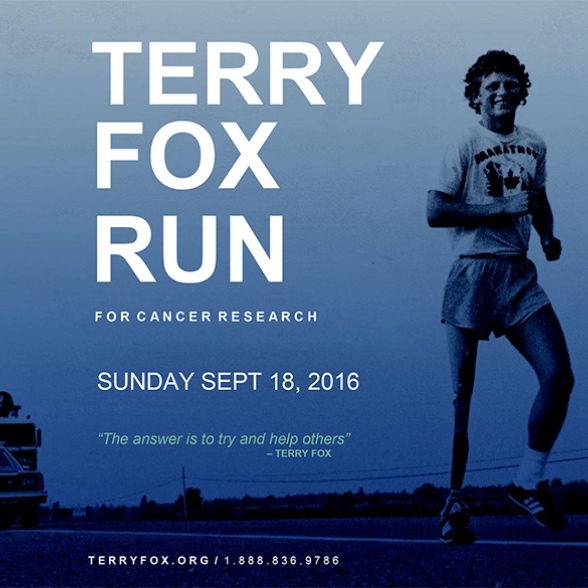 Never give up on anything you truly believe in because even if you don’t reach your specific goal, your efforts may lead somewhere even better. You may inspire someone, or create something of unanticipated value, maybe something even more amazing than you could ever have imagined yourself capable. That’s the lesson I draw from the example of Terry Fox.

It’s that time of year again. I will be participating in my third Terry Fox Run back at High Park this Sunday, September 18. With the help of family and friends (in Canada, the United States, Brazil and Japan), I raised about $2000 for cancer research in 2015. With your help, maybe we can raise even more this year.

I won’t harp too much on the reason I’ve taken to fundraising for cancer research, as I imagine many of you know that story. And I won’t repeat the facts to you about the devastation cancer causes and has caused for many of us. I simply hope you’ll continue to help out in any small way you can. Amazingly, 84 per cent of funds raised by the Terry Fox Foundation go directly to cancer research and it is an organization that I trust.

As my brother Nicholas LePan wrote: “The Terry Fox Run is an opportunity to support a good cause. This money will go towards keeping the ones we love around a bit longer and ensuring everyone gets a shot at a full life. We all have a limited time on this earth so let’s make the most of it with those we love by improving the quality of everyone’s life.”

On January 2, another dear family friend, Bruce Schaef, passed away from cancer too soon. He had just returned from a trip to India. Experiencing some fatigue and shortness of breath, he underwent a round of testing, at which time a tumour was discovered on the back of his heart. He died within weeks of the diagnosis.

Bruce donated generously to each of my fundraising efforts for cancer research. And as a Baritone in the Canadian Opera Company, Bruce shared his formidable voice at my Father Phil LePan’s Memorial in 2013, performing two beautiful songs, Spring Sparrow and Ae Fond Kiss, which were especially meaningful to my Mother.

To Sponsor the Terry Fox Foundation (and me), please follow this link.

This event breathes life into the dream of a young man, driven by a sense of urgency and responsibility so great that he ran 5373 kilometres across this country on one leg to fight cancer. His effort… contagious. His story… transformative, a legacy of hard work and fun, determination and hope, an example for Canada and the world. The Terry Fox Run is now held in over 100 countries. Last September about 9000 communities across Canada and over 100,000 people participated in the 35th annual Terry Fox Run to support innovative cancer research.

I had a great 10 km run last year in Peterborough, Ontario. The course at Nicholls Oval Park skirted the Otonabee River, providing a nice breeze to push me along in the heat. With just 379 participants, most out and done in the early morn, I was a lone runner at 11 a.m., which allowed for peaceful reflection whilst giving an effort athletic enough to bring on the sweat. A swim and dead man’s float followed at nearby Beavermead Beach and Little Lake. This year it’s back to High Park, the site of many of my high school cross-country races, where my Dad watched me compete at least once. He’ll be with me there again this Sunday.

For insight into the man behind the myth, the documentary Into the Wind reveals the real Terry Fox and why his example is so easy to love and respect. The ESPN film follows the grizzly challenge of the hastily planned Marathon of Hope and running across the country on one leg. It takes us back to 1980 when an unknown 21-year-old man fighting cancer demonstrated to a country what perseverance is all about.

“It took cancer to realize that being self-centred is not the way to live. The answer is to try and help others.” Terry Fox, 1980

Writer/ Editor
View all posts by Chris LePan →
Gallery | This entry was posted in Uncategorized. Bookmark the permalink.

1 Response to The continuing story of Terry Fox