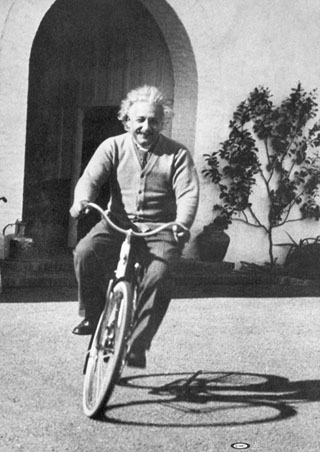 “Imagination is more important than knowledge.”

In the field of physics, there is no greater influence than Albert Einstein. His most important contribution to the world is his theory of general relativity. His conception of space-time changed our understanding of the universe in a fundamental way.

No more do we view the rotation of the planets as dependent on the sun’s gravitational pull. Einstein showed Newton’s hypothesis that the planets would instantaneously veer off course without the presence of the sun to be incorrect. He knew that nothing in the universe could match the speed of light, and since the sun’s rays took eight minutes to reach Earth, he concluded that there would be a lag between the subtraction of the sun and any effects that would cause. This meant that gravity was not the great force it had been made out to be. A new conception of the universe became necessary.

Einstein conceived of an organized system of space-time, whose fabric can be warped by gravity, stretched like a trampoline by the weight of objects. It is gravity and the great weight of the sun that warps the fabric of space-time into curves along its surface. The planets follow these curves around the sun. Remove the sun’s weight from the equation, and the displaced fabric of space-time adjusts, sending a ripple, not unlike when a rock is thrown into a pond. Only when this ripple reaches the Earth would it veer off course. This theory explained the realm of very large things.

But on the microscopic level, his work on quantum mechanics influenced the work that went into the process of splitting the atom, which harnessed the power of the universe.

He never fulfilled his dream of integrating quantum mechanics and the theory of relativity into one theory of “everything.” His legacy can be seen in the continuing work of the physicists on string theory, an as yet untested theory to explain all matter in the universe. The answer may be hidden within black holes, where it is thought that the organized system of space-time and the chaos of quantum mechanics collide in a reality we’ve yet to experience.

Understanding the nature of the universe is not something to which most of us can devote our working lives. But to consider the nature of our existence and the space and time we inhabit is unavoidably human. As one scholar put it, Einstein sought to understand the mind of God. What could be more important than taking a step in that direction?